Skulls have been around for millennia. From cavemen to royal families, there is no such person or social stratum who hasn’t tried on skull jewelry. Although, the role of skulls in body ornaments is more than decorative. At one point in history or another, skulls denoted mortality and, surprisingly, immortality. They were associated with intelligence, dark sciences, and even family ties. This is a complex symbol, and its wealth of meaning appeals to people of all walks of life.

People started wearing skull amulets and accessories at the dawn of civilization. Ancient Egyptians and Aztecs considered the cranium a representation of an eternal cycle of life and death. While modern people are scared of what lies in wait after life, our ancestors took things much easier. They perceived our mortal life only as a stage of existence. Therefore death, according to their beliefs, was only a transition from one stage to another. This transition wasn’t imbued with fear and denial. On the contrary, people treated it with respect and gave it a sacred significance. Skulls accompanied people throughout their before- and after-death experience.

Thin shards of bones and skulls doubled as items for piercing. Undamaged animal and human skulls became attributes of shamans and priests who used them in sacred ceremonies and rites. Aztecs constructed gigantic altars of skulls to please their gods and instill fear in dissidents. Interestingly enough, this macabre tradition evolved into something we enjoy wholeheartedly in the present day. We are talking about Dia de los Muertos or the Day of the Dead as we know it in the English-speaking world. As one of the much-loved Mexican holidays, it pays tribute to skulls and their power to connect the world of death with the world of living. It even brought a new type of skulls, sugar skulls.

Unlike ancient skulls imbued with deadly vibes, these lavishly adorned marzipan sweets-turn-jewelry are strewn with exclusively positive meanings. They are a celebration of life and reverence for deceased relatives. Plus, they are super vibrant, intricate, and exquisite, a real piece of art. No wonder sugar skull pendants and earrings became one of the most beloved types of skull jewelry, as shown on FilmDaily.co, not only in Mexico but also around the world.

You shouldn’t think that skulls remained in antiquity together with superstitions and odd beliefs. In more progressive eras (although we now consider them dark ages) skulls acquired a new significance. And yes, this significance is related to death again but Middle Ages stopped perceiving death as something natural and, therefore, not freighting. People should be aware of death and live their lives so that they have nothing to repent of on their deathbed – this is was the paradigm of that time. In accordance with it, medieval citizens started embellishing themselves with symbols that reminded them of death, i.e. skulls, bones, and skeletons. Jewelry with incorporated death and mortality symbolism got the name memento mori, which means ‘remember that you’re going to die’.

Nowadays, this doesn’t sound like a great idea to flaunt a reminder of your mortality, but back then, it aligned with the teachings of the church and its tendency to intimidate parishioners with torment in the afterlife. Well, if that what it took to instill morality and piety in the community, then it was all for good.

Evolving the idea of mortality, Queen Victoria took skull fashion to a whole new level. After the departure of her beloved husband, she started wearing a mourning ring. You can call her a trendsetter, because her subjects followed suit and began to order memorial and commemorative jewelry. It goes without saying that these pieces were custom-made. They featured engravings showcasing years of a deceased’s life, words of condolence, wishes for peace in the world of the dead, etc. Some rings also carried drawings depicted a departed person or a piece of their hair.

The 20th century, marked by great upheavals, intensified the trend of having skulls as part of military insignia. This tradition wasn’t new (because skulls were part of the military clothing even among the ancient people) but world wars made it ubiquitous. Soldiers wore skulls on their uniforms, they picked up skull badges of fallen enemies as trophies, and when they returned home, they did not want to part with such a frightening yet respect-commanding symbol.

Motorcycle riders, who are also the founding fathers of the biker movement, made the greatest contribution to skull popularization. Believing that skulls patronized them on the battlefield, they carried these beliefs into their civilian life. By a happy coincidence, bikers stumbled upon Mexican rings, the prominent motives of which were skulls. Due to these baubles, their respect for skulls took on the tangible form of jewelry. Then the fashion for skulls swept the rock and roll scene, and from there it seeped onto the pages of fashion magazines and catwalks. Perhaps, if it weren’t for bikers, you wouldn’t be considering getting skull rings and pendants as a fashion accessory. 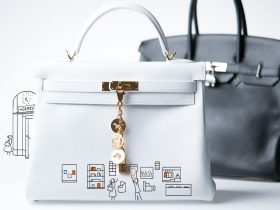 The History of Hermes